Sustainability and design for the bathroom with NK Concept taps

Our commitment to the preservation of the environment has led us to develop products which allow a more responsible use of water and energy resources. We create sustainable options, increasingly demanded by architecture and interior design professionals, thanks to the application of the most advanced technology.

A clear example of this type of ecological product can be seen in one of our latest collections of  bathroom taps: NK Concept. A simple, slim design defines this series of mixer taps characterised by the formal purity of their shape.

To achieve a greater control over energy consumption in the bathroom, the R&D department at Noken has designed a turn on cold system, also used by the taps of the Forma series. The taps turning on cold allows the mixer tap to be turned on in the central or left position, allowing only cold water to flow. Thus, with this system the risk of burns is eliminated, as well as the unnecessary use of hot water. In this way, energy consumption associated with water boilers is reduced.

Furthermore, like the other Noken bathroom taps, NK Concept includes flow limiters which reduce water consumption without causing a loss of comfort in the bathroom. This is achieved through the inclusion of a cartridge in the pipe of the mixer tap which reduces water consumption by up to 60% compared with conventional taps, limiting the flow to between 5 and 12 litres of water per minute. 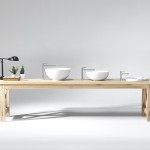 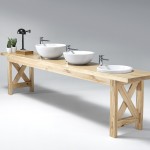 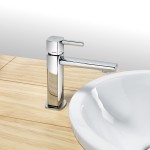 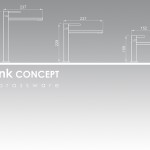 Created for users who choose a sustainable lifestyle, the NK Concept collection of taps has a wide variety of mixer taps for washbasin, bidet, bathtub and shower. In the case of the washbasin taps, the series has models of different heights, thus creating an ergonomic solution which meets the needs of each user. Furthermore, they can be installed on the washbasin itself, wall mounted or fitted directly on the floor.