Modern life often obliges us to have impossible schedules, along with a tireless work pace. Thus, now more than ever, we must pay special attention to those little routines, as well as time and energy optimisation. Having a shower becomes one of the most revitalising pauses in the day. A relaxing time for personal care, which gives us the perfect balance between mind, body and soul after a hard day.

With the aim of making people’s lives easier and more comfortable, Noken Porcelanosa Bathrooms, the firm from the PORCELANOSA Grupo specialised in bathroom equipment, banks on the bathroom equipment digitalisation. Pure innovation focused on enriching people’s experiences through showers which are more customised, revitalising and functional, in every sense.

One of the innovations which has had a strong influence in the world of showers are the thermostatic taps. Shower taps which, do away with the sudden temperature changes, as well as the water expense which sometimes involves finding the right temperature. It is a piece which helps to control both energy and water saving at home. They are provided with two remote controls, one used to adjust the flow rate easily and intuitively, and the other one for selecting the desired temperature manually. 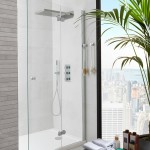 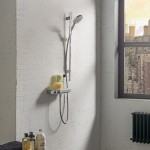 Furthermore, one of the other features of these types of taps is their revitalising function. Regarding the concealed thermostatic taps with several water outlets, these ones can be combined with side jets which give the body the refreshing whirlpool treatment, or shower heads with several functions and waterfalls, such as: cascade, rain, jet or nebulizer. Therefore, people can enjoy completely different experiences and a shower focused on sensations.

In conclusion, the sustainable character of the thermostatic taps, their revitalising properties, as well as their adaptability and aesthetic versatility, make thermostatic taps become the ideal complement for everyone at home.