Once again, this year Noken will be presenting its new bathroom fittings and taps at Cersaie, the international benchmark exhibition for the ceramic and bathroom design sector, which will take place in Bologna (Italy) from the 22nd to the 26th of September.

Among the new products from Noken, which can be seen at the PORCELANOSA Group’s stand during the trade fair, the new Chelsea collection of bathroom fittings is featured, composed of a washbasin which is completed with suspended or freestanding units – with a wood or champagne lacquer finish – as well as a  toilet and a bidet, both wall fitted.

The new range by Noken is inspired by the formal purity of the bathrooms of “la Belle Epoque”, to create an atmosphere of nostalgia which distils modernity at a glance. Through stylised elements which soften the geometric forms with rounded edges, the Chelsea series offers an elegant and fresh retro look.

Thus, the latest bathroom fittings collection by Noken revises conventional classic lines to achieve a modern atmosphere, in line with the styles most demanded by interior design professionals. All of this creates a must-have exclusive for lovers of sophistication, as the collection’s pieces of furniture have been made based on the eco-ethics philosophy, which makes each piece of Chelsea furniture unique. 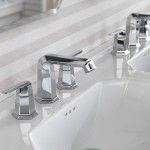 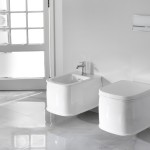 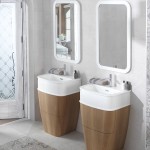 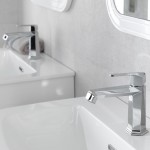 Following this same philosophy, Noken combines this new collection of toilets and washbasins with the taps created to complete the Chelsea series which harmonise a classic style with advanced technology. Characterised by its angular geometric lines which reinforce its vintage air, Chelsea taps offer various three piece mixer taps for washbasins, and even a free standing mixer tap suitable for bathtubs. The showers of the series allow different combinations, including thermostatic taps with the SMARTBOX system which offer a totally controllable shower.

The remarkable personality of the collection has led us to develop an elegant work of design, inspired by the pure lines of the collection, with its own logo which confirms the exclusivity of this collection, intended to set trends internationally in bathroom design.