The purity of the lines, neutral colours and finishes with natural materials have been the keys that have led interior designer Jorge Belloch to create the bathroom design of this modern single family home in Almansa, Albacete. It has the purest minimalist style, reducing interior design in bathrooms to the beauty of the essential.

The selection of the clean aesthetic of the exterior architecture of the building also translates to the elegant interiors of the home, predominated by white walls and noble materials such as stone or wood. The Noken bathroom fittings combine naturally in this geometry with the purest minimal style thanks to the use of the bathtub built into the wood and the transparent screens. 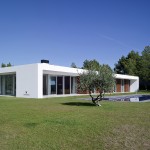 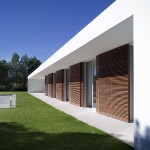 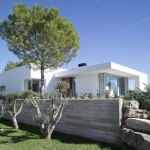 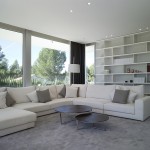 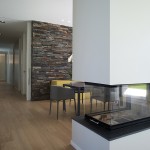 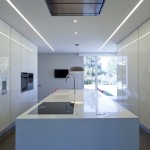 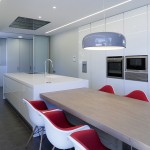 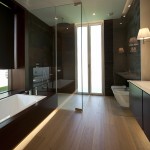 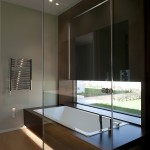 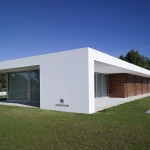 To fit the bathrooms of the house, designer Jorge Belloch has chosen bathroom taps from the NK Logic collection, defined by a sophisticated squared design with straight geometry, for the bathtub and shower of the main bathroom. The wet areas are completed with various models of shower heads from the firm with circular designs, which contrast with the angular geometries of the rest of the fittings: Giro 50cm, an unmovable shower head model which offers a pleasant sensation in the shower; and the practical Neptune Slim Rondo 30cm shower head, fitted to the wall.

Another MUST for achieving purity in the forms of the bathroom designs is the selection of suspended elements, such as suspended toilets from the Essence-c series, which transfer the distinction of haute couture to the bathroom with an aesthetic that softens the angles by smoothly rounding them.

Additionally, with the aim of achieving maximum comfort in the home, several Noken shower heads have been installed, specifically the Contracts model, characterised by its urban, functional aesthetic, which offers the maximum technical performance of a towel dryer with two format options, 500x1180mm and 500x730mm, to facilitate their installation in spaces of any dimensions.

In the kitchen, Urban kitchen taps have also been chosen, presenting a smoother design with a stylish curved pipe which dominates the central island of this large space.