From March 11th to 14th Noken took part in the 12th Expo Revestir and Architecture and Construction Forum edition held in Transamérica Expo Center de Saõ Paulo, in Brasil. It is a 40000 square-metre exhibition and it is considered as being the Fashion Week as far as architecture is concerned. Numerous architecture professionals and international distributors attended this exhibition.

Among the other new designs in the Noken showroom stand, visitors were able to see  PORCELANOSA Group’s most symbolic collections, such as the Mood and Lounge series, the latest designs in sanitarywares and bathroom taps in its catalogue, such as the new finishes of the Chelsea series, Forma versatile basins or the NK Concept ecologic bathtub, washbasin and shower taps  series.

Without any doubt whatsoever, the technical and beautiful innovation of the Mood series has been one of the most appealing designs of the firm in Expo Revestir 2015, among others highlighting basins, sanitary wares and bathroom taps designed by Rogers Stirk Harbour + Partners and Luis Vidal + Architects for Noken, revealing technically superior solutions hidden behind their avant-garde beauty of suggestive shapes. 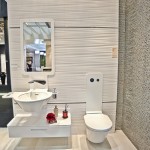 With regard to the Lounge collection, designed by Simone Micheli, the most eye-catching samples for the visitors were the new shower heads  with chromo therapy, and the basins and bathroom taps of this series defined by pure elegant lines, essential for creating bathroom atmospheres where comfort is a must.

Along with Noken, 250 exhibitors came from Brazil, Italy, Spain, Argentina, Portugal, Switzerland, Germany and Israel, and over 45.000 visitors, a 7% increase if we compare this year’s with last year’s Expo Fair. As a matter of fact, and thanks to these numbers, the Fair has been considered to be the main event taking place in Latin America with regard to wall tiling, bathroom equipment, sanitary wares and kitchen taps, all of them falling under the umbrella of creativity, technology and innovation.

Do not miss the picture gallery of Noken in Expo Revestir 2015: see pictures.