How to choose a shower head?

The shower head is the main element which brings the rest of the bathroom together, since it is key when it comes to achieving an atmosphere that gives off a feeling of wellness, along with the functionality that a bathroom must have.

For this, it is crucial to opt for a shower head that responds to the requirements of daily cleaning, as well as the dimensions and the formats of each shower. Find out which shower head is best suited to your bathroom and get a highly complete experience in the shower.

The ceiling sprayers stand out as they offer the possibility of placing the shower or bathtub in any part of the bathroom, and furthermore, without the obligation of having a wall to support it.

Besides, if you have a bathroom with reduced dimensions, the best option is to include a ceiling shower head, since in this way, you will save space and have greater freedom of movement in the shower, thus getting a more natural shower experience.

Concealed ceiling shower heads offer a futuristic aesthetic which surrounds the setting in an elegant and minimalist environment. One of Noken's most featured built-in ceiling shower heads is the Lounge collection. A structural element which provides an imposing aesthetic elegance to its exterior, as well as the highest technology in its interior. 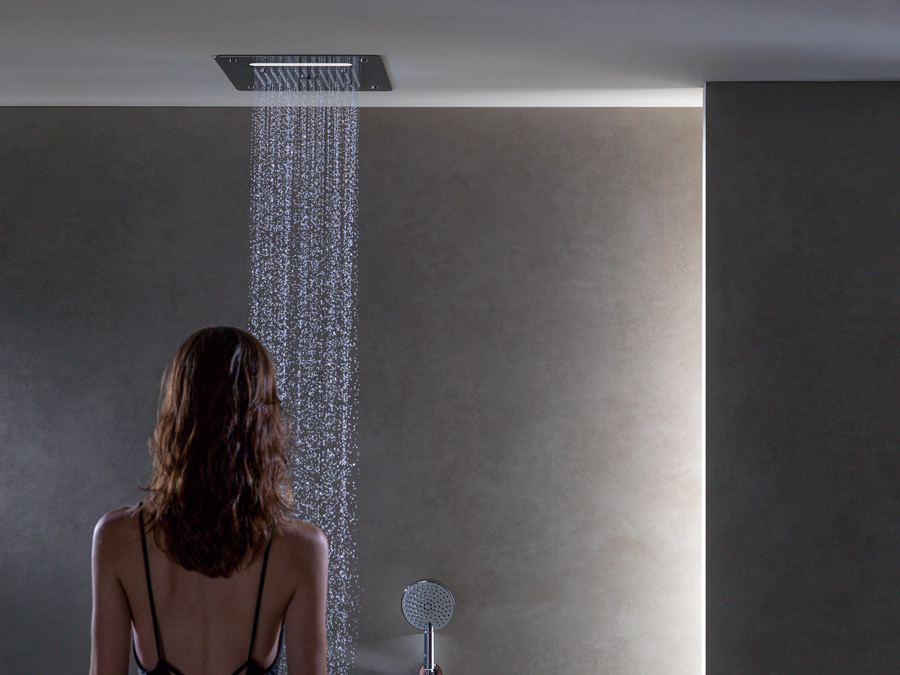 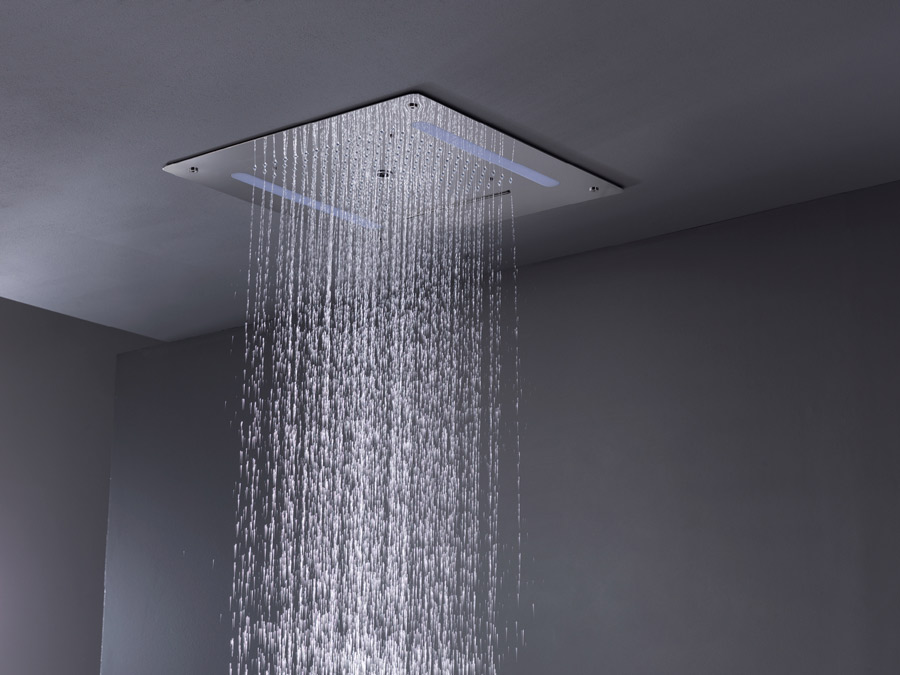 The Lounge shower heads have hydrotherapy functions with several water outlets and chromotherapy, including LED lighting in colourimetry. For greater adaptability, they are perfect for all types of spaces, since they are installed by being concealed in the ceiling and, they are available in three different formats: 40cm×40cm, 40cm× 60cm and 60cm×60cm.

In Noken, we have rounded and square shapes, in light and ethereal designs, such as the SlimLine extra-flat shower heads, which provide highly natural shower experiences which are respectful towards the environment, since they use a flow limiter that allows for less use of water and energy. All this, with a design based on the minimalist philosophy, "less is more". 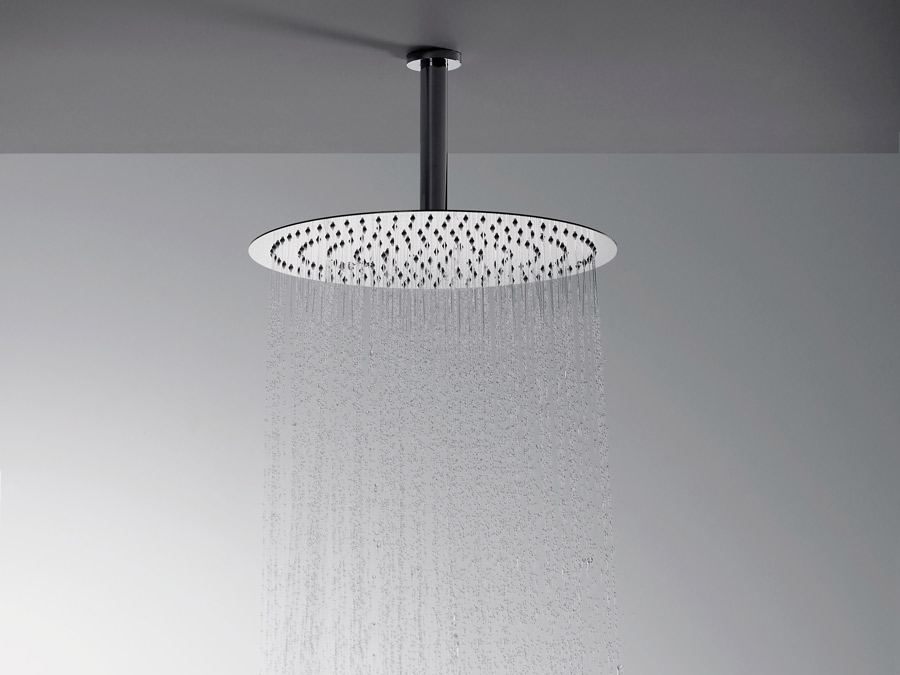 Another of the options provided by Noken are the built-in wall shower heads. Perfect designs both for big and wide bathrooms and for small spaces as well, whose infinite range of decorative possibilities offer classic and vintage inspired designs, along with more contemporary aesthetics.

Built-in wall shower heads are ideal for bathrooms where enjoying a surrounding experience in which aesthetic is the key element to create the shower atmosphere. 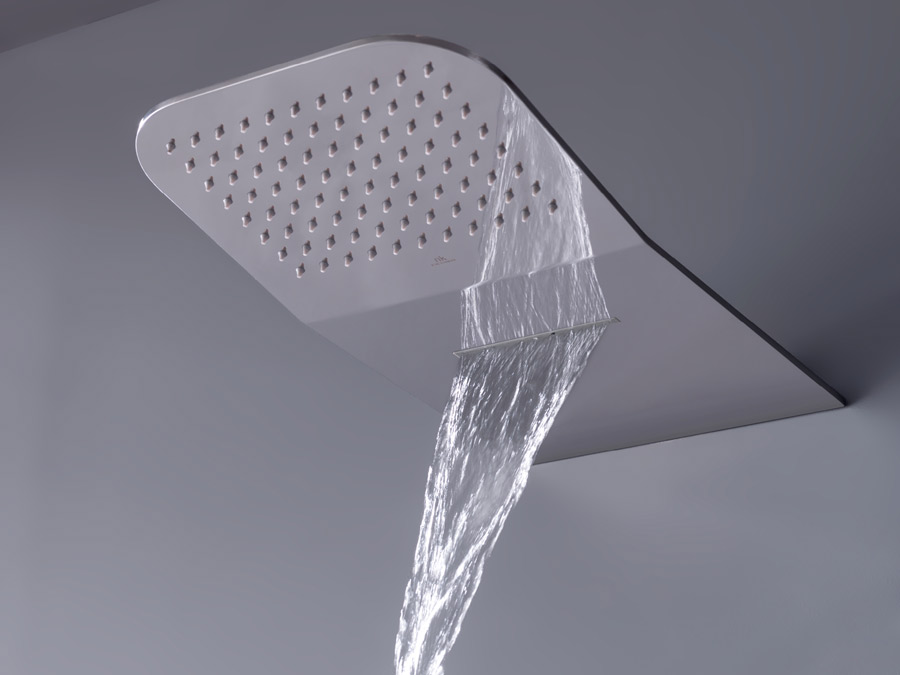 In Noken, we find the Forma shower head, a wall design without the shower arm which incorporates two water outlets (rain and cascade) and the ECO flow limiter sustainable system, a system which saves energy, generates less CO2 and helps to reduce water consumption without losing out on comfort.

In addition, we find wall shower head designs with a shower arm, an option with more versatile formats and thus a bathroom experience much more suitable for each user.

In this category, we find the Neptune Slim shower head, a design which provides an extra flat and minimalist design which adapts perfectly to the measurements and distribution of every bathroom. 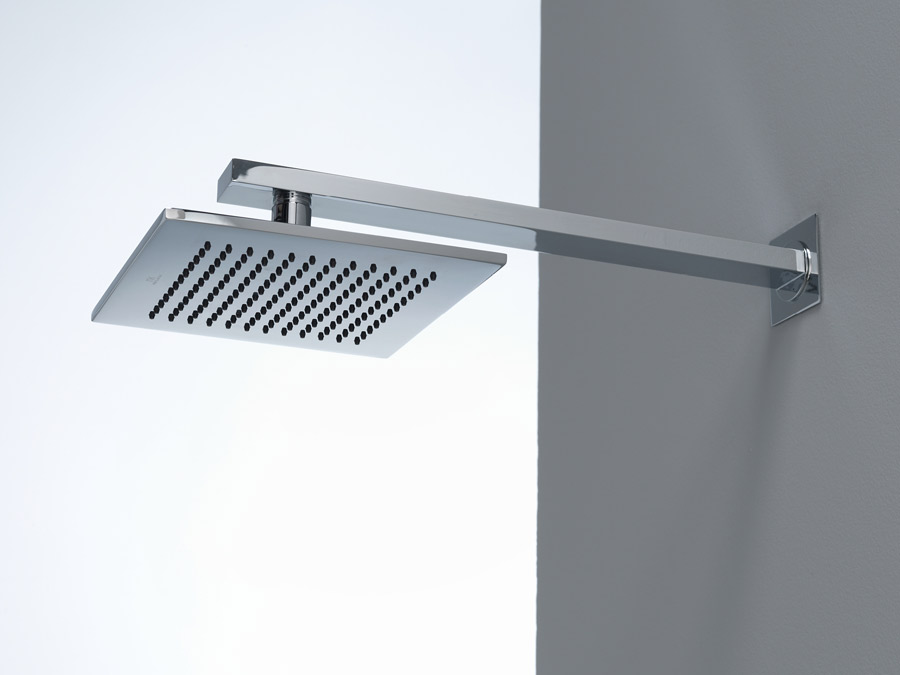 Finally, the incredible effort made by Noken to adapt to trends and innovations from this sector must be highlighted. This effort has meant that Noken has widened its shower head range with an elegant and suggestive black matt finish. Perfect designs that get bathrooms inspired by industry, which are capable of enhancing the bathroom aesthetic to the max. 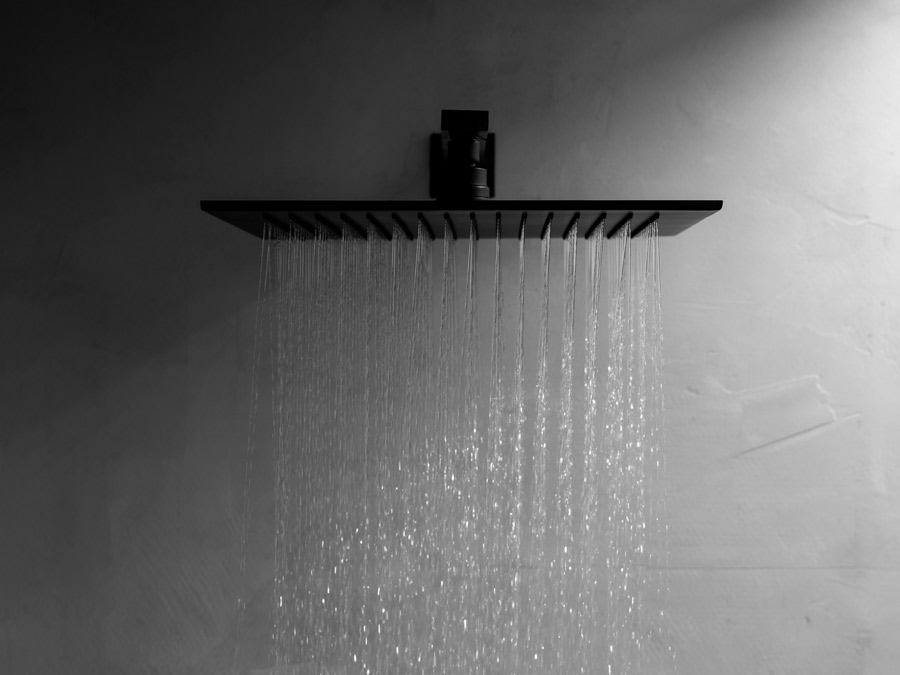 To sum up, Wellness Sensations shower heads by Noken has some impressive features such as: hydrotherapy, chromotherapy and even aromatherapy, which offer a revitalising and relaxing shower experience. As well as that, Noken has many designs suitable for every bathroom to suit the most varied of tastes.