Making a commitment on new materials, enhancing what is pure, reformulating shapes, venerating technology, surrendering to infinity, prioritizing white and dispensing with the superfluous. These are the commandments which define futurism in interior design.

A trend emerging as a cutting-edge artistic movement in the mid-twentieth century, but today, it is very usual in interior design and architecture, working tirelessly to recreate atmospheres and solutions which make us take a trip into the future.

Pure R & D + i is applied in a particular way to interior design in bathrooms as an emerging trend. And, it is precisely this return to what is pure to refer to how the bathroom of the future is being shaped. A space that has become a laboratory for innovation in recent years, to design the perfect fusion of experience and avant-garde design. 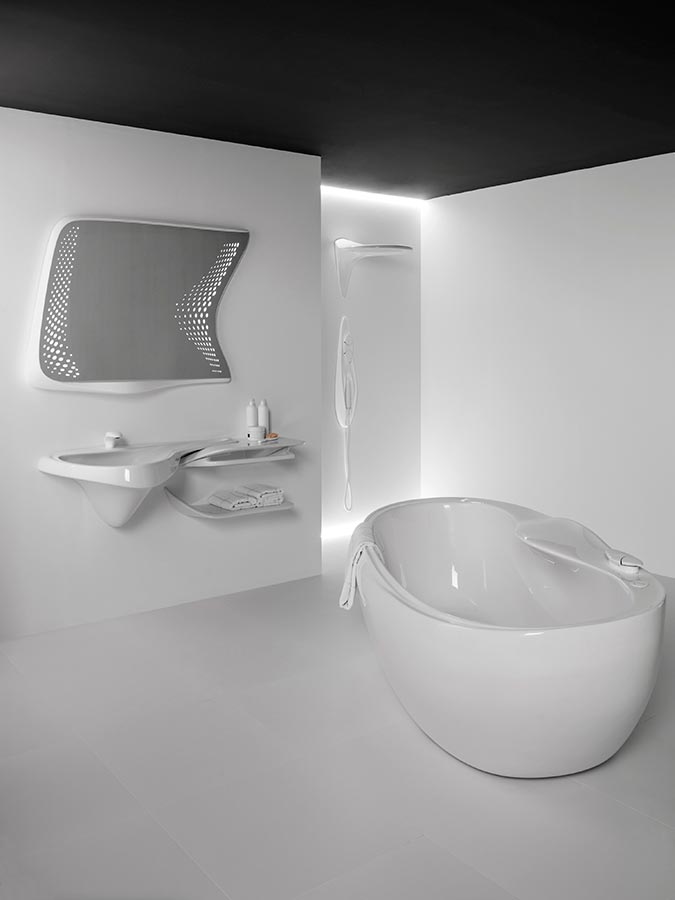 Futurism is pleasure for technology

The aspiration of the futuristic bathroom is to create a smart home where technology is at the service of comfort in today’s modern living. Machine and movement.

It also requires environmentally-aware technology. The design of Vitae washbasin taps draws inspiration from the flow of water and aims to protect it. It limits the flow to 5 l/min and has an aerator with an American WaterSense certification that guarantees its sustainability. A WaterForest design, the eco-conscious concept developed by Noken.

Extending them to infinity, going beyond the limits of design and squeezing out all the materials’ possibilities. All of this in order to demonstrate that through avant-garde design, both maximum expressiveness and the challenge of design foundations are possible.

Futurism is infinity: the eternal white

There is white in infinity, because expanding shapes is crucial to use eternal solutions such as TOTAL WHITE and light, which allow for enlarging spaces and creating an expansive bathroom. 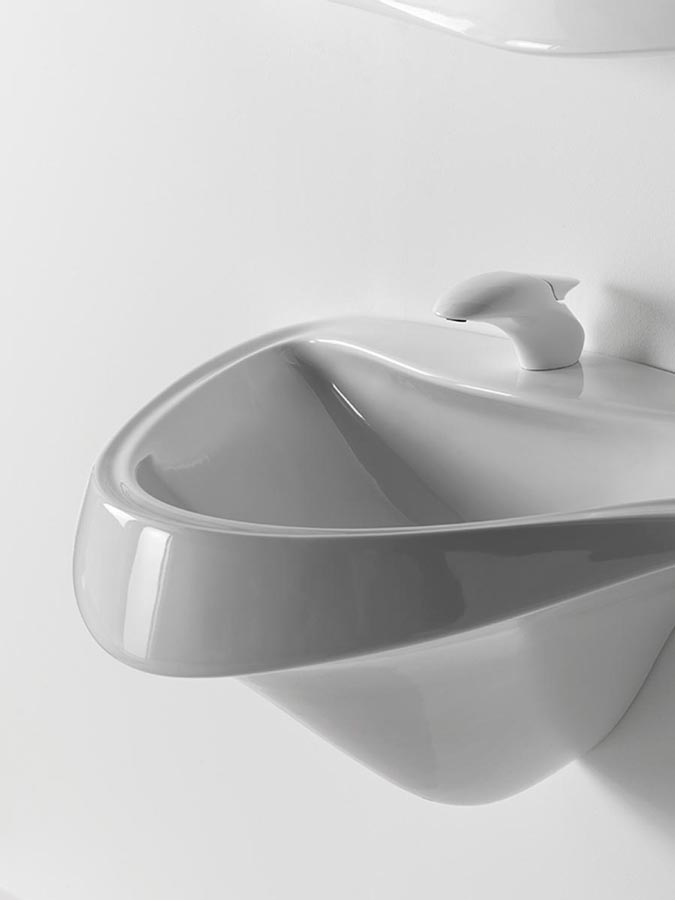 Futurism is emphasizing the purest: the experience

In the exercise of prioritizing white and dispensing with the superfluous, futurism connects irremediably with aesthetic minimalism and the recreation of atmospheres which respond to simple and pure shapes, doing away with ornaments to strengthen what is truly relevant: experience in everyday life.

Futurism is present in VITAE today: the origin of life

A premise that Zaha Hadid showed with the design of the Vitae collection was that bathroom designs allow for boldness which is virtually unsuitable for today’s world. A collection which uses the past wisely to take us onwards, and towards the future, and it was created especially for an experiential space, namely the bathroom. With the work of this architect, the home space turns into a laboratory where expanding the purest futuristic style with her own style and identity stamp: an unmistakable organic design. 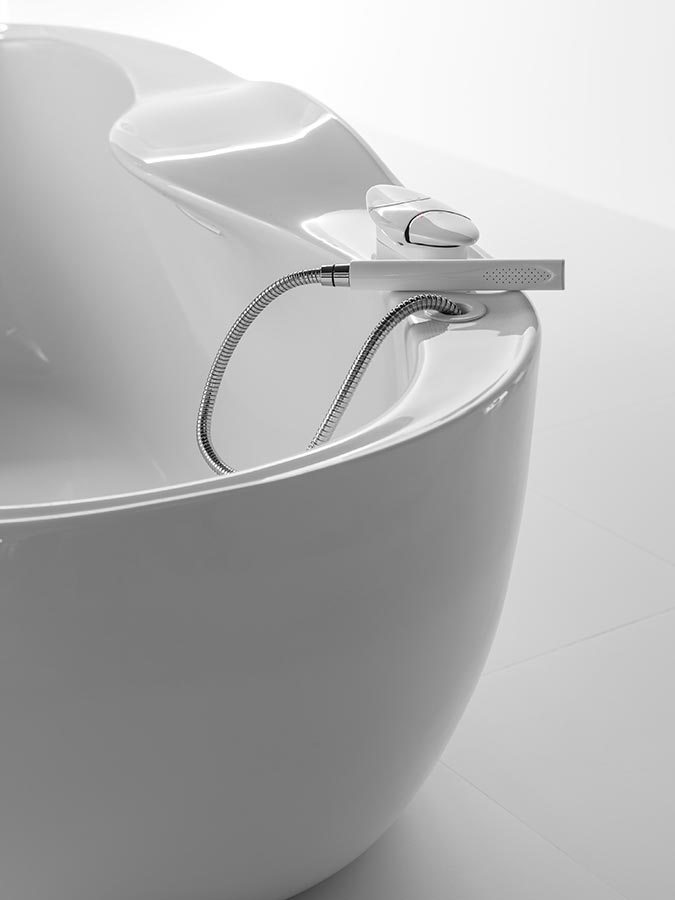 The creation of this collection is the result of the PORCELANOSA Grupo's commitment to research in innovative materials and designs, and the hyperbolic creativity from Zaha Hadid. In synergy, they have created an integral bathroom which breaks away with from the norm; it perfectly exemplifies the futuristic trend. Pure innovation with flowing lines which evoke water movement.

Discover the collection from Zaha Hadid in VITAE. 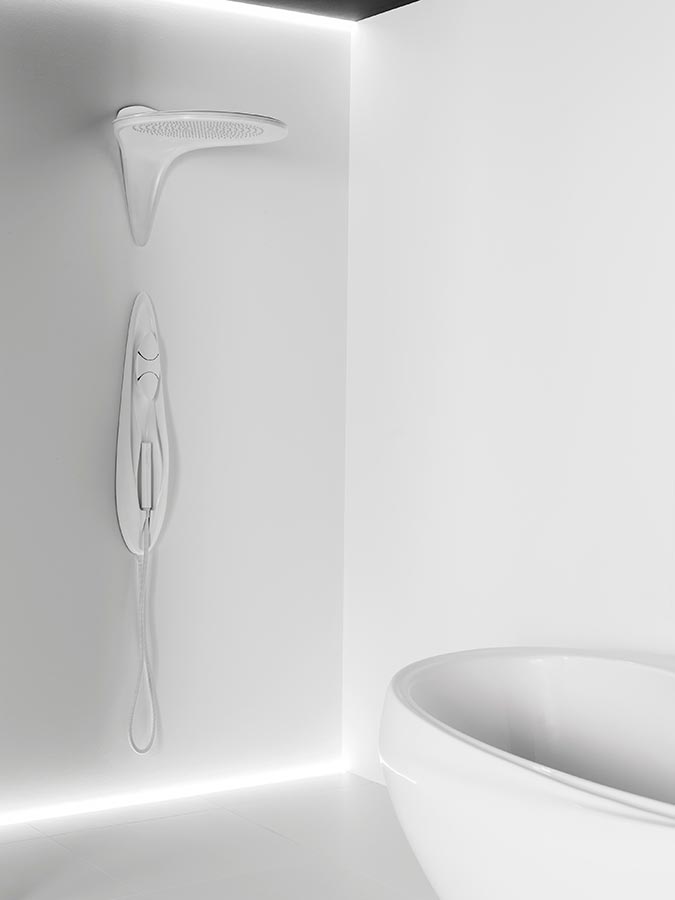 Me Dubai Project: the last architectural work by Zaha Hadid

With five stars and 27 floors, Opus is the posthumous work of architect Zaha Hadid (1950-2016) and it brings together much of that imagination formed by intertwining volumes, striking lines and open spaces. Three concepts that were developed by architects Patrik Schumacher and Christos Passas from the Zaha Hadid Architects studio in the Vitae collection for Noken, and which recently won the World Architecture Community Award 2021.

A building with two glazed towers joined by a glass bridge that seems to revolve over itself to integrate the Hotel Me by Meliá in Dubai in the Burj Khalifa district, one of the most luxurious in the city. Zaha Hadid's studio has included the futuristic and unconventional design of the Vitae series in its bathrooms, which reproduces the movement of water through its sinuous and organic lines in its taps, washbasins, toilets, bathtubs, shower columns, mirrors and accessories. The series has been recognised with seven international awards: Architizer A+Awards 2017 winner in two subcategories - Special Jury Prize and Public Award; MosBuild Moscow 2018 Best Bathroom Collection; German Design Award Nominee 2018; Interior Innovation Iconic Awards 2017; Most innovative design at iSaloni 2016; ArchiExpo 2016 I-novo as a 'most innovative' series; and Best Design at the I-Novo Awards 2016.

You can see the whole project in this blog post by Porcelanosa Group. 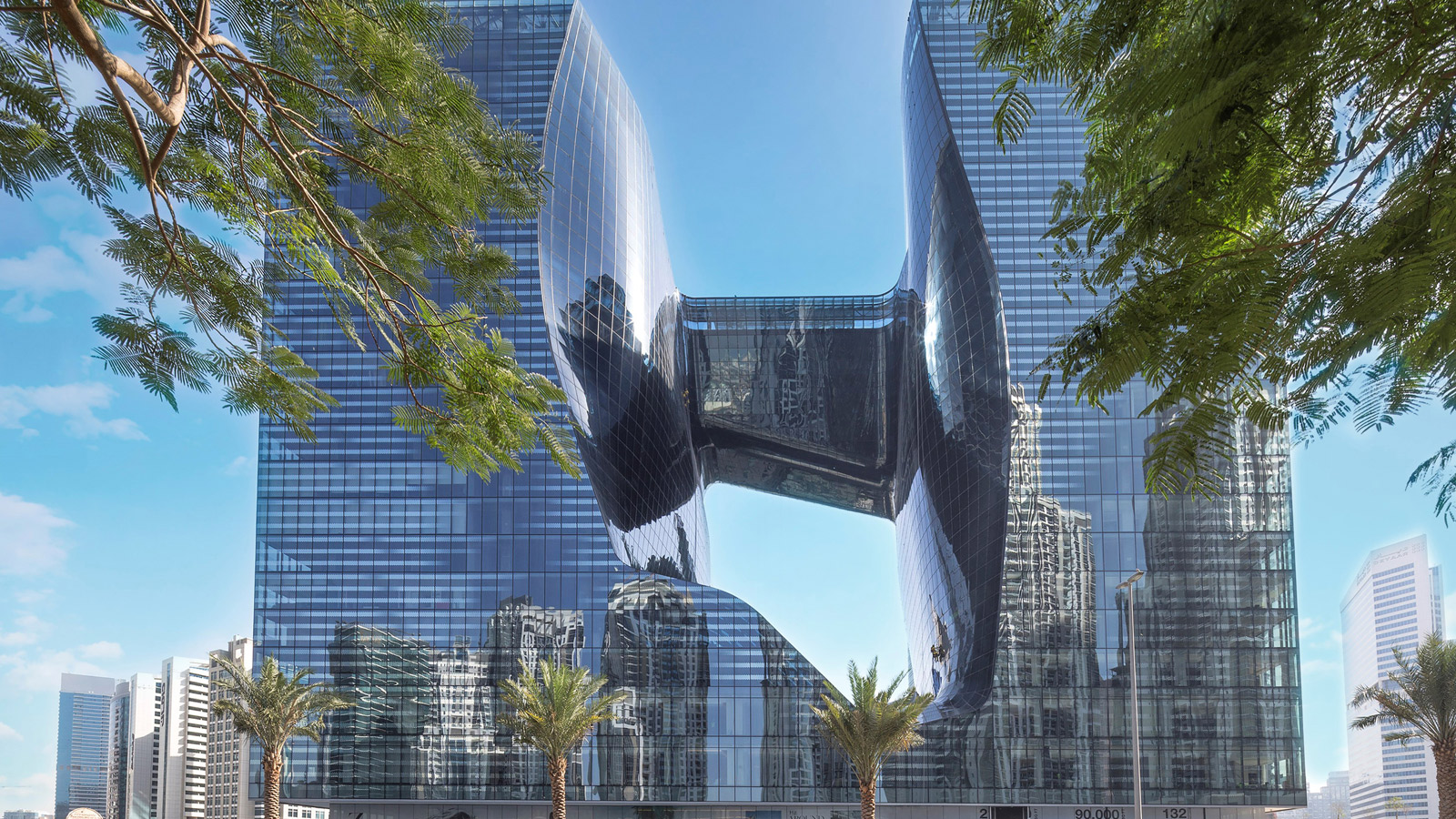 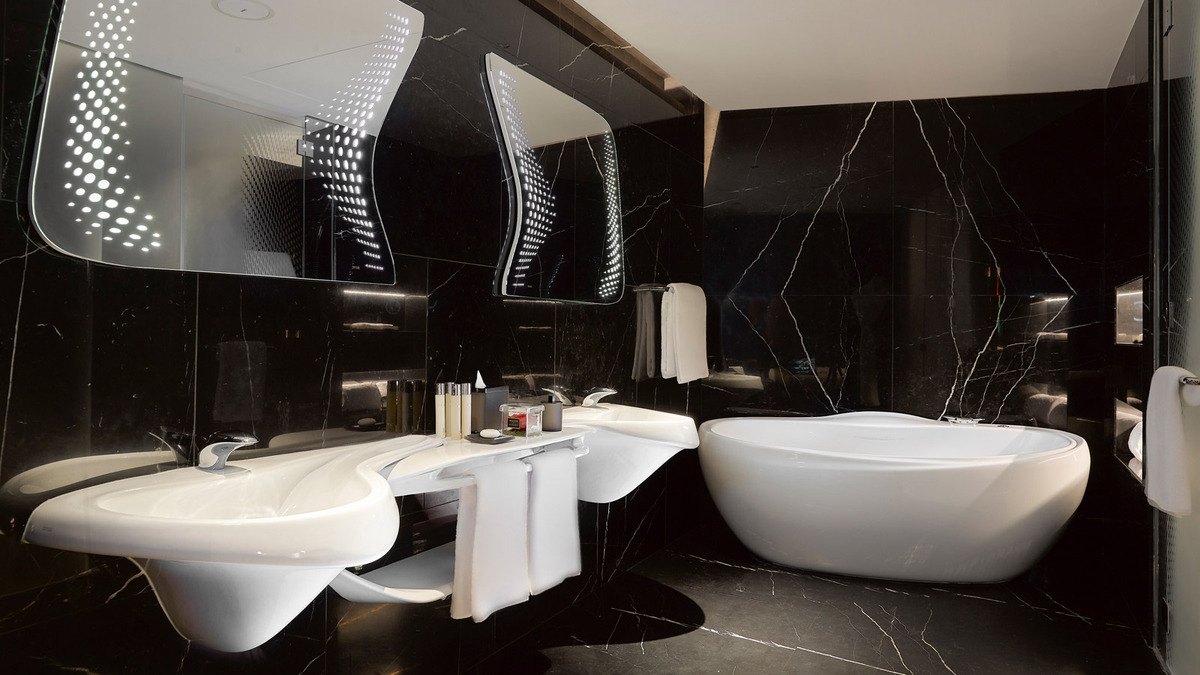 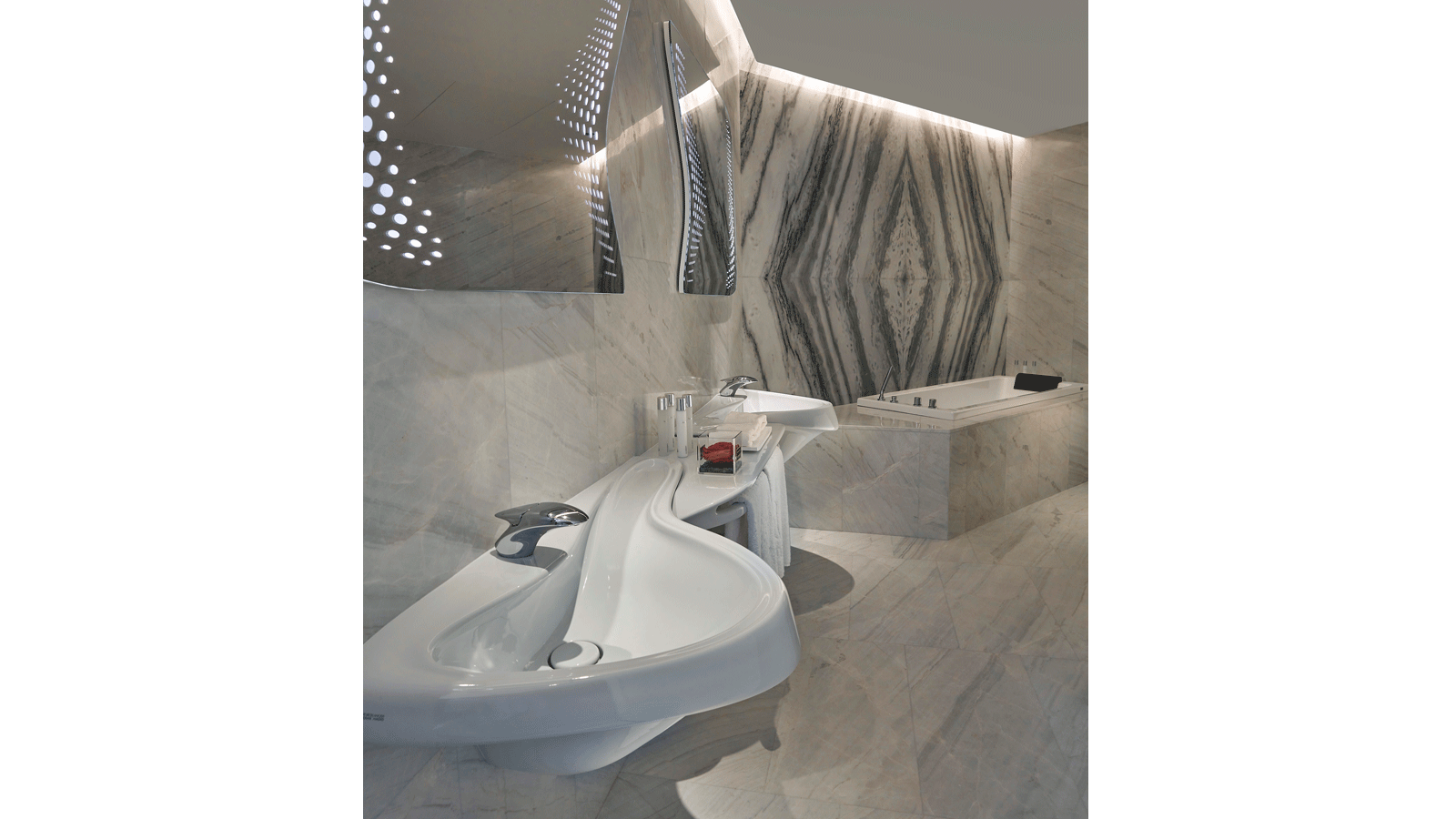