Noken at Eurocucina: the latest trends in kitchens and bathrooms from the furniture fair in Milan

The PORCELANOSA Grupo is once again present at Salone del Mobile 2018, the furniture fair in Milan. The firm will reveal the very latest trends in both kitchens and bathrooms done by Gamadecor and Noken Porcelanosa Bathrooms, as well as other firms such as: Porcelanosa, Venis, L’Antic Colonial, Systempool y Urbatek. Numerous innovative designs full of exclusivity and excellent design which, look to surprising visitors and professionals alike. All the innovations from the different companies from the group will be able to see themselves showcased at EuroCucina-FTK (Techonology For The Kitchen), a space geared towards kitchen equipment, in which we will also see bathroom atmospheres leading the way.

The design by Noken Porcelanosa Bathrooms: The latest in kitchen taps

Noken Porcelanosa Bathrooms gets to the furniture fair in Milan in order to be the perfect complement with Emotions Kitchens by Gamadecor. Cutting-edge kitchens, which are nothing short of being technically exceptional which, are becoming even more functional with kitchen taps by Noken. The Emotions Kitchen in 5.90 Pizarra Brillo and 7.90 Roble Polvo, includes electronical taps from the Pure Line kitchen, in which we will be able to see how it works. This tap stands out, above all, because of its technology, which is able to adjust the flow rate, as well as controlling the temperature, thanks to the independent control button with LED light, which changes colour. As well as that, this button allows for the simplest activation with just one touch, which makes daily life in the kitchen that much easier. Other kitchen tap models can be seen in situ at Eurocucina and they are Spring and Next in a Inox finish, while Noken Porcelanosa Bathrooms will put its full tap catalogue at the disposition of all the visitors in order to meet the expectations of the most exceptional and demanding kitchens. 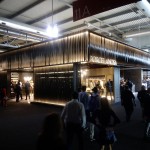 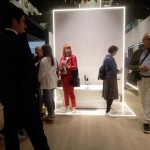 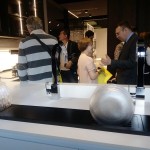 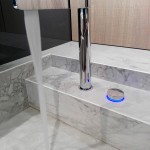 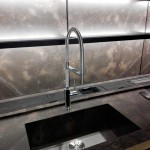 The bathroom, another design for the home at EuroCucina

Apart from the kitchens, which are the indisputable centre of attraction at Eurocucina, the fair also offers the possibility of showcasing the most innovative equipment in bathroom design. Alternatives to the decoration of the home that joins elegance and technology.

One of the bathroom atmospheres that Noken Porcelanosa Bathrooms offers for the furniture fair in Milan is that from Lounge, a space where the Lounge Azul Noche bathroom furniture leads the way. Functionality, a big space for storage and low maintenance for furniture, whose finish is the very latest trend. The design is completed with a mirror and tap from the same collection which, in this case, comes in a titanium finish. Also, the free-standing Arquitect bathtub will also be on show, which is also fitted out with Lounge titanium taps installed on the wall tiles. The same titanium finish extends the shower atmosphere that is offered by Noken Porcelanosa Bathrooms for EuroCucina. 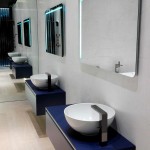 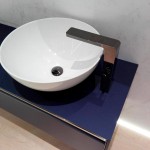 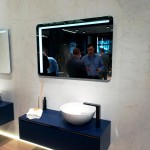 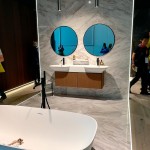 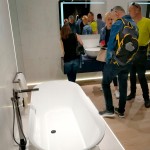 A place in which to unwind that includes extra-large Lounge showerheads and Project shower trays made in Noken Ceramic.

Bathroom taps  such as Vitae or Mood can also be seen in the international kitchen fair in Milan, as well as the Round taps in a black matt finish, which will go with the Pure basin and bathroom furniture by Systempool. 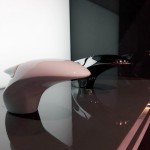 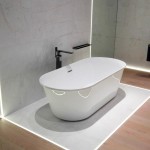 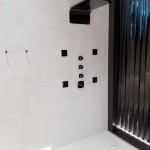 The Salone del Mobile in Milan will open its doors from April 17-22. Noken Porcelanosa Bathrooms, from the PORCELANOSA Grupo will be present in the 11 A25 A29 Pavilion. The objective is to strengthen the international reputation of the company, above all, in Italy. This event is of some importance to the kitchen and bathroom sectors, now that some 300.000 visitors are expected to turn up at a fair which, counts on 111 displays stands in total, along with distributors throughout the 21.800m2 area.