Simon Smithson states that each project design involves a big challenge. It does not matter if it is about a modern or cutting edge collection for bathroom equipment or an ambitious project like the design of a new airport terminal: Practical considerations always exist that need to be dominated.

He knows so, and not only because of being the son of a celebrated professionals in the architecture sector, where he followed in the footsteps of his parents, Alison and Peter Smithson, but also because his reputation as an renowned architect all over the world has made him today be what he is.: a partner in one of the most important architect firms in the world: Rogers Stirk Harbour + Partners.

Since he joined the firm in 1991, the architect, Simon Smithson has represented the firm Rogers Stirk Harbour + Partners in both symbolic and ambitious projects such as the design for the new terminal 14 in Barajas airport, Madrid, and the Sterling award for best project; el Campus Palmas Altas, an office complex which is a sustainable development model located on the outskirts of Seville; the re-urbanisation of the South Bank in London or the National Assembly for Wales, or the Law Courts in Antwerp.

Simon Smithson, in collaboration with the bathroom equipment firm from the PORCELANOSA Grupo, together with Luis Vidal + Architects, has been the author of the design of one of the most symbolic designs for Noken: MOOD. The architect explains to us quite openly and clearly just exactly what inspired him to be able to bring this collection to life, and furthermore, how he lives with his daily passion for architecture.

Looking back at the development stage, launch and the two first years of MOOD.

I’d like to start with asking how the MOOD project began.

I was invited to visit the Porcelonosa factories and warehouses in Vila-real and I was really really impressed so when we were asked if we might like to collaborate on the design of a new bathroom series I leapt at the chance – although not without trepidations. I knew how difficult it is to design products after working with Siteco on the light fixture for Madrid Barajas Airport.

Which part of the MOOD project has been the biggest challenge?

I think every design project is a huge challenge, since you must start with a clean piece of paper. Beginning with that blank sheet is like staring into a void.

Like every project you have to begin by learning a new set of conditions, all the requirements for the building to function correctly.  For example, to design an airport building or a law court you have to understand the rules of the game.  In this regard a bathroom is no different; there are a number of practical considerations you have to master.  However, I do remember very clearly standing in one of the labs at Noken looking at all the different types of outlets for toilets (which vary according to country) and feeling a little out of my depth.

What drove you to use colour for this project?

Bathrooms are interesting in that the distinction between the “container”, i.e. the space, and the “content”, i.e. the furnishing, is different from many other spaces in the home.

So we thought, why not reverse the normal way of seeing the bathroom? In other words, see it not as a space occupied by elements but instead explore if the fixtures themselves can assume the role of major spatial protagonists.  Even in our very early sketches you can see an exploration of merging the fixture with the wall surface. 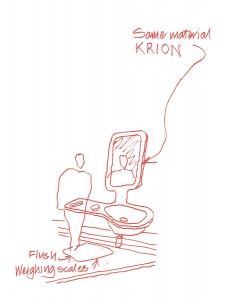 The other thing I think you can see in these early drawings is the idea that bathrooms ought to be more fun – after all it’s where you start the day. Colour seemed to be a way of injecting playfulness into the space.

Looking back what would you do differently on the project?

After any project one always thinks: ‘Well now I understand the problem! If only I could do it all over again.’  I suppose what I would most like to have done is to go and work for a couple of months in the workshops where they make the prototypes.  To get my hands dirty in the process of fabrication.

As I have been working as an architect all my life I suppose I am not really sure how, or indeed if, our approach differs from that of say a product designer.  Maybe our first reaction is different in that we think of any object in terms of how it might create a space.  The light we designed for Barajas Airport T4, for example, creates space both as an individual element but also when placed as a field of objects.

Why did you become an architect?

I was not a very able student and I fear I may have thought being an architect would be easier.  On top of that I suspect I was not really aware of a lot of other options.  For example I had no idea how one might go about being an industrialist or an inventor.  As a child, the job that looked the most exciting to me was Capcom at Houston’s Mission Control but it simply did not dawn on me that you might actually become a Capcom – maybe it all seemed so far away.

What are the qualities a successful architect should have?

There are many ways to approach being an architect but I think you have to be an optimist – much of our work is focused on willing things into being.  So in the same way you also have to be pretty persistent.  Any building takes 5 to 10 years to realise (that’s from the very first sketch to occupation), and that’s a long shift!

I also think you need to be observant – to keep your eyes open.  What we do is create spaces that set up relationships between people, be it in the workplace, a home, a place of worship or wherever. Therefore, I think you have to be attuned to the nuances of social behaviour.  In that regard, a large component of our work has an element of the sociologist or anthropologist.

You are a worldwide recognised architect but what else would you like to learn?

One thing I would like to learn is to play an instrument – to be a musician – which I suspect maybe rather contradictory.  To play in front of 50,000 people is perhaps not the best ambition for someone so frightened of being in the limelight.

Last but not least, what does the future of ‘bathroom architecture’ look like?

I have the feeling that the history of ‘futurology’ is pretty much littered with error.  What I find fascinating is how little toilets, to take one example, have changed since they were first invented by Mr Crapper.  It’s a bit like the bicycle – the fundamentals remain pretty much the same, although the variations on the theme seem almost infinite.  Porcelain seems to have stood the test of time pretty well and I suppose one might like to think there would be some new material to replace the ubiquity of this rather old (but trusted) material. But I like surprises so maybe something completely unexpected will happen.  This is good for designers as it will set up a completely new set of conditions for us to work with.  I look forward to it! 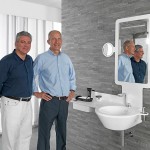 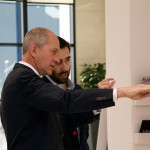