In charge of her own studio (Carmen Baselga_Taller de Proyectos), Carmen Baselga has been carrying out her activities as an interior designer since the 1980s, participating in multidisciplinary projects which have encompassed houses, offices, shopping centres and restaurants as well as ephemeral spaces and scenography.

Among her most representative projects is the design of the Multi-sensory Workshop for the prestigious chef Paco Roncero, located in the historic Casino de Madrid. Also notable are her outdoor designs for the Bedtime Stories [Outdoor] terrace-bar for Casa Décor on the Docks of the Port of Valencia; the terrace of the Vertical restaurant by the La Sucursal group; and the MuVIM (Valencian Museum of Illustration and Modernity) terrace.

During her career she has won numerous awards, among them the FAD 2004 (Barcelona) prize, the prestigious FX-International Interior Design Awards (London) prize, and the Plaza Matadero Madrid first prize. Currently, the designer combines her interior design projects with her teaching work, giving Master of Interior Design classes at the CEU Cardenal Herrera University.

Recently, Carmen Baselga has redesigned Porcelanosa’s window display in its central branch in Calle Colón in Valencia. This was a project in which the interior designer included several bathroom elements from some of Noken’s most representative collections: Mood and Essence-C. Among these, the products which stand out are Mood washbasins with a Krion® countertop and integrated towel rail, a toilet and various models of taps from the collection: the free-standing taps for bathtubs, mixer tap for washbasin and two digital thermostatic shower columns. All of this is completed with the Essence-C model towel radiator in a chrome finish. 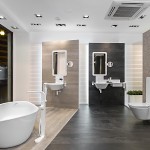 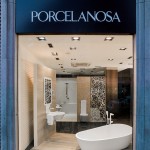 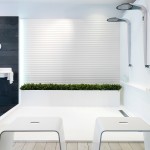 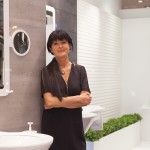 These are the interior designer’s answers to our questions…

1 – Why did you choose Noken products for Porcelanosa’s window display in Valencia?

A Porcelanosa window display without Noken is unimaginable, the toilets, the taps, the accessories, they are not merely a complement, they cannot and must not be neutral; integrated as a whole they contribute to the personality of the space that we design, whether it is the bathroom of a home or, in this case, a window display.

2 – What inspired you in creating this design?

We chose to set out a display with the Mood series by Noken to demonstrate a very complete series; it integrates both the toilets and taps and the mirrors of different sizes and diverse accessories such as towel rails and soap dispensers, helping us to give a united character to the whole space despite using a wide variety of materials.

3 – Why the mood collection?

Another reason for choosing Mood is the use of technology in the bathroom. This is something which is used more and more in homes, and sometimes it is difficult to accept. A way of bringing the public closer to this was to install it, giving it a certain prominence, as technology is no longer ugly “junk” that has to be hidden, it can also be attractive, as in this case.

4 – Which of our products to you like the most?

Of the Noken products that we chose I would highlight the Mood shower columns, which integrate the digital thermostat in the same element, which seems very elegant to me because it offers a lot in a single piece. The taps are also of the same style, but the shower is iconic, and attracts my attention more as a piece.

5 – Do the accessories have any characteristics which have attracted your attention?

The towel radiator is the ESSENCE model which is unique because it can be placed between small vertical hanging elements for towels or bath robes, and even allows you to hang a clothes hanger with a garment on it if you need to dry it quickly, remove creases or simply warm it up before putting it on. 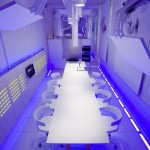 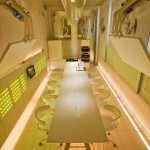 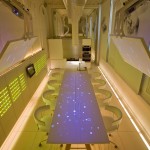 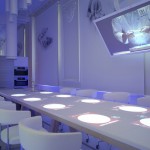 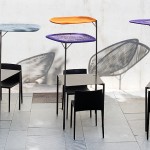 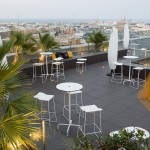